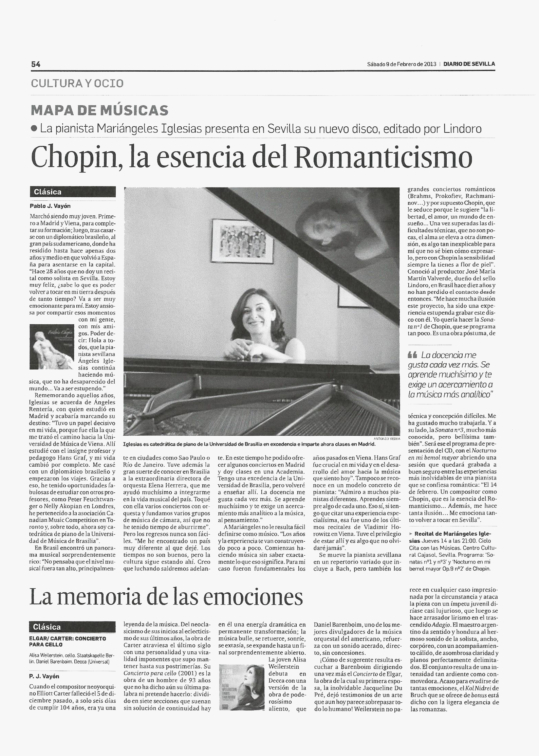 Ángeles Iglesias mentions her astonishment before the high musical quality level she found in Brazil, especially in cities like São Paulo or Rio de Janeiro. However, upon returning to Spain she found a very different country to the one she had left, one that was going through difficult times. She names the opportunity she was given to listen live to the pianist Vladimir Horowitz in Vienna as one of her unforgettable experiences. She is delighted with university teaching, and she looks very much forward to recording her CD, featuring Chopin’s first and third sonatas. 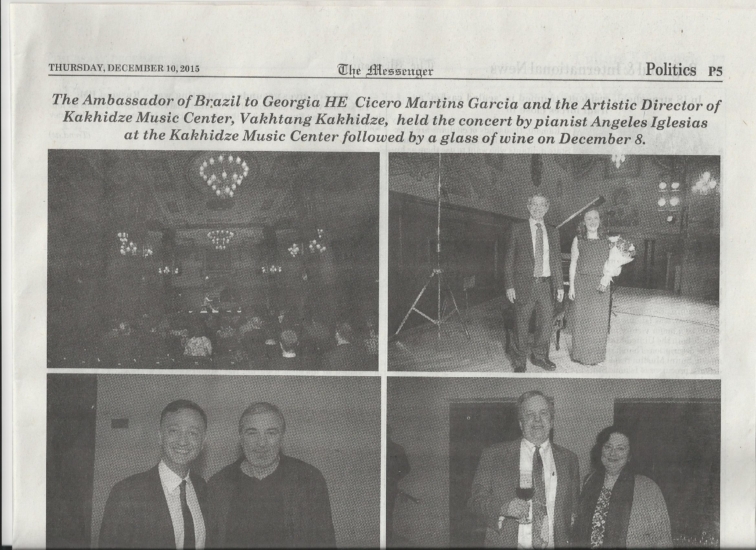 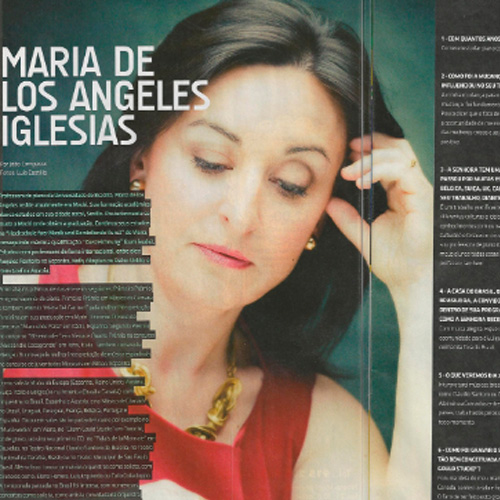 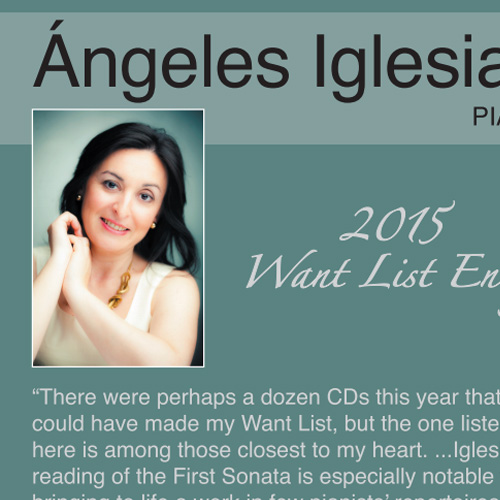 The lesser-known works of Chopin offer rich pickings for those performers and listeners willing to explore. Recently, Ian Hobson’s ongoing complete Chopin on Zephyr has offered up myriad delights. Here, Ángeles Iglesias offers the First Sonata along with the well-known Third. Some pianists put all three sonatas together on one disc (Ashkenazy and Biret spring immediately to mind, but there are more). I wonder if this was an option? And why couple sonatas Nos. 1 and 3, rather than 1 and 2?

“I think it was, first of all, a question of timing. It was a shame to forego the Second Sonata, with all the beauty it encompasses. It was a painful choice not to record the Second Sonata, but the CD had room for only two sonatas, and I absolutely wanted to record the First, due to the fact that it is usually neglected and I wanted to give the listener an opportunity to hear it; so I had to sacrifice either the Second or the Third. Usually a normal CD lasts about 60 to 70 minutes, and, according to my point of view regarding this work, I wanted to show Chopin’s development through his piano sonatas, from adolescence to maturity, although listening to this First Sonata the listener will discover that Chopin had nothing but maturity, even at 17 years old. Hence, going without the Second or Third sonatas was a heads-or-tails decision; one would have to stay, the other would have to go.”

I point out that the First Sonata is neglected, and ask what Iglesias sees as the First Sonata’s strengths—and its weaknesses? “I agree completely with your opinion that this First Sonata has been unfairly ignored. Chopin’s youth caused him to be dismissed as a mere pupil. Furthermore, taking certain liberties in composition was not yet a recognized practice, given, perhaps, the prevailing, unavoidable political circumstances. This tricky state of affairs notwithstanding, his approach to composing demonstrates that, rather than creating something commonplace, which could be expected of someone his age, we find, rather, a masterpiece rich in counterpoint, harmony, modulations. I think this First Sonata owes its relative obscurity to, perhaps, the continuous reshaping of all these themes, which make us wonder whether Chopin sought to convey philosophical reflections.

“We must also bear in mind that, as a posthumously issued work, the First Sonata was published when the Second and Third sonatas were already well known and had been made widely accessible to the public as they were being listened to for the first time (which, let us be clear, does not subtract any merit from them). Only an academic or a very keen listener would have been interested, then, in becoming further acquainted with the First Sonata.”

So, what exactly is it that attracts Iglesias to the music of Chopin? “That’s a very difficult and complex question. Playing Chopin, has been, to me, a lifelong challenge. As a teenager, my teacher always used to say that, until one reaches certain experiences in life, one is not ready to play Chopin; and, of course, one reaches freedom once one solves his work’s technical problems, as with everything in life. I think my teacher was very right. The notes in Chopin surpass earthly feelings, and I learned how to keep a cold mind and a warm heart when performing his music, which is no easy feat.”

One of the defining qualities of Iglesias’s Chopin is her awareness of the contrapuntal side of Chopin, which really came out in the performance of the First Sonata. Was she deliberately trying to highlight Chopin’s link to Bach? “Well, I think the counterpoint is a strong suit throughout Chopin’s whole body of work. We cannot forget that when he began his studies with Professor Elsner (and subsequently dedicated this sonata to him), Chopin took six weekly hours of counterpoint lessons and, once again, had to emulate the prevailing scholastic composition trend at the time, where of course complete freedom was inhibited. There was censorship, and he had to keep within acceptable bounds. Why not compare his First Étude in C Major with the first Bach Prelude? I think that is a clear example that underscores the link between them.”

What other Iglesias recordings are there? “I have one professional taping made before this CD, which was recorded live in Toronto’s Glenn Gould Studio and features varied works by Soler, Bach, Schumann, and Ravel. I also plan on recording orchestral and chamber music, especially Brazilian pieces; I hope it will pan out.”

I ask about how Iglesias records, the precise recording techniques involved. “I prefer, first of all, to record entire movements; after that, I am used to recording long takes, a couple of times each. Only in emergencies have I recorded the odd small section, but these have been small exceptions. My preference is to record in large chunks in order to keep the music flowing. The CD was recorded in an excellent auditorium called Cajasol, in Seville, which is why the acoustics featured in the CD are completely natural and unaltered. A couple of microphones would receive the sound coming from inside the piano, and another couple from the surroundings. I know the brands of the microphones are Schoeps and Newmann.”

And Iglesias’s repertoire, is it centered around the Romantic period? “My repertoire is not focused on Romanticism, though I must confess that the period fascinates me. I am constantly revising the programs in my recitals because I believe that any musician should master any genre, just as one should be well acquainted with musical history.

“I play quite a lot of contemporary music, especially Brazilian, where there exists a wide field of quite unknown classical music, and as I am a piano teacher at Brazil’s University of Music, I have had the opportunity to familiarize myself with great musicians and play a lot of their works. I am well travelled, which has helped to enrich my outlook on contemporary music in general. This does not mean that no other styles should be played or that contemporary music would interfere with my way of interpreting composers of other periods.”

Would, I wonder, Iglesias consider recording a disc of the lesser-known Chopin, perhaps of early works? I’m aware of the commercial aspect of this, but since she has laid the foundations in this release, might it be more viable? “I think that sounds like a splendid idea. Taping any composer’s lesser-known works is something that always draws in listeners, the ones that form, perhaps, a more demanding elite. I would be thrilled to do it, especially after having recorded this disc.”

On a more scholarly note, did Iglesias consult Chopin’s manuscripts and/or the first editions of these works as part of her preparation and study? And which edition(s) were used in the recording itself? “For Chopin’s works I normally use the Paderewski edition, which is precisely the truest one to the original manuscripts. Some photographs of Chopin’s original manuscripts are featured in its first section, and of course my teacher, Hans Graf, always counseled me on this subject, being, as he was, so knowledgeable about them. For this recording, I also referred to the Urtext edition, as I believe it worthwhile to compare distinct editions.”

Linked in with the question of editions is pedaling, a huge topic in Chopin interpretation. “I don’t think it is good to exaggerate anything in Chopin, especially regarding rubatos and pedal, and it is true that many pianists overdo it, in my opinion. Chopin is very meticulous in his score notations; should he require that something be done in his music, he will write it down. The pedal is plainly indicated in the places where it must be used, and there is no need for further inventiveness. Over-pedaling would create an undesired ambience for the composer. We mustn’t forget that his music is very counterpoint-driven, and we should be able to clearly hear all of its fine points.”

Finally, I ask about Iglesias’s musical history. You began studying in your hometown of Seville, is that correct?

“Yes, that is correct. I was encouraged by my mother and by my teacher, Ángeles Rentería, who was my mother’s classmate in piano class. I have always studied with her in Spain and she was the one who first introduced me to the world of music. I began playing in Seville, and subsequently went on to study in Madrid and in Vienna. Ángeles always encouraged me to give public performances; I’d spend more time on stage than anywhere else, which is why I developed self-confidence facing the audience. She was also Hans Graf’s pupil, whereby they both shared a certain similarity of ideas.

“Indeed, Rentería invited Graf to give some master classes in Seville, which is when I had the opportunity to meet him; so, after completing all the exams that were required by Madrid’s Royal Conservatory of Music, I thought it would be a good idea to move to such a prestigious and competitive piano school, the Vienna Hochshule für Musik und Darstellende Künste, and to continue studying with someone I already knew and who had utterly impressed me.

“I think I was one of the luckiest people in the world with Hans Graf; it really was a privilege to be able to study under him for five and a half years. He was a teacher and a friend. He would organize lectures of the highest quality, and he made us comment on the pieces performed by other students, which helped each and every one of us to structure our own interpretation of each work.

“There is an anecdote I’d like to relate: Despite Graf being an extraordinary pianist and professor, once any student came forward bearing a Romantic piece, he’d always say: ‘This piece goes to my wife.’ Carmen Graf, his wife, was acknowledged at the University of Vienna as being one of the best interpreters of Chopin in the world. I acquired extraordinary and unique ideas on Romantic music under his teaching.

“I was then 19 years old. It was an unforgettable experience, starting with the fact that it was the first time I moved away from my family, my country, and my language. All in all, I grew and matured quite a bit. I am still pleased to this day, because this distinguished professor, Hans Graf, is the man who introduced me to the true love of music.

“I’d also like to stress that I was very impressed by the way in which foreign students are accepted into the University of Vienna. No-one interviewed me or required any written exams; they told me to simply sit at the piano and play, and I was assessed by nothing other than how I played. I graduated 25 years ago in Vienna, but my ‘Viennese’ training has remained until this day. For personal reasons (my husband is a Brazilian diplomat), I’ve lived in several countries, such as Brazil, Canada, the United Kingdom, Belgium, and now Spain herself, and in all of them I have persevered with my professional pursuits. I have always preferred the stage to the recording studio, but, as all in life is dynamic, I do not discard the possibility of dabbling further inside the recording world.”